Talented, emerging street artists can really breathe new life into a city. Their vision and ideas have the ability to start a conversation, transform a once tired space and add a touch of vibrance to local enclaves. In a collaborative effort to rejuvenate Nowra’s streets and laneways, Shoalhaven City Council, the Shoalhaven Historical Society and local building and shop owners have come together to commission a series of artist murals around the CBD. Visitors and locals can venture upon the Nowra murals trail and discover each artwork, that highlights a different part of the region’s history. Wandering from mural to mural is also a great way of exploring Nowra and its surrounds a little bit differently. Before you begin the journey, here’s some information about each of our profiled artists, whose works shine bright above our CBD streets. 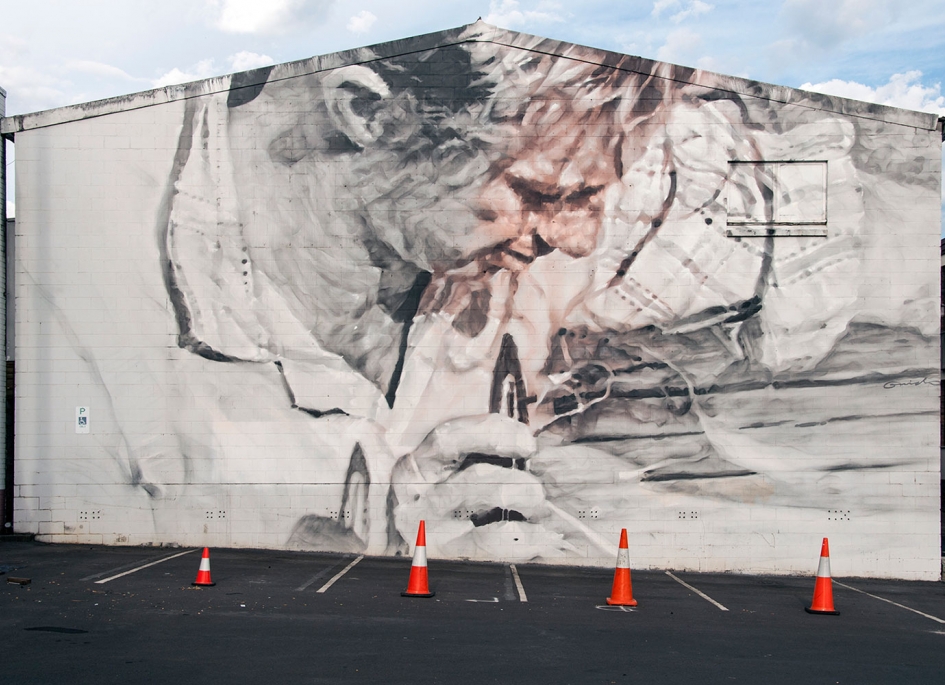 This mural painted by Brisbane based artist Guido van Helten can be found on the large rear wall of the former Betta Electrical building, which faces Egans Lane carpark. Once an enormous, blank space in a somewhat neglected corner of Nowra’s CBD, the wall is now a tribute to the Shoalhaven’s deep fishing roots. The subject of the mural is an angler mending his net at Greenwell Point, based on a photograph by Australian photographer Jeff Carter. During the process of painting his artwork, van Helten revealed that he has always been interested in this part of NSW and that he spent a lot of time searching through Nowra images in national photography archives before landing on this photo as his inspiration. 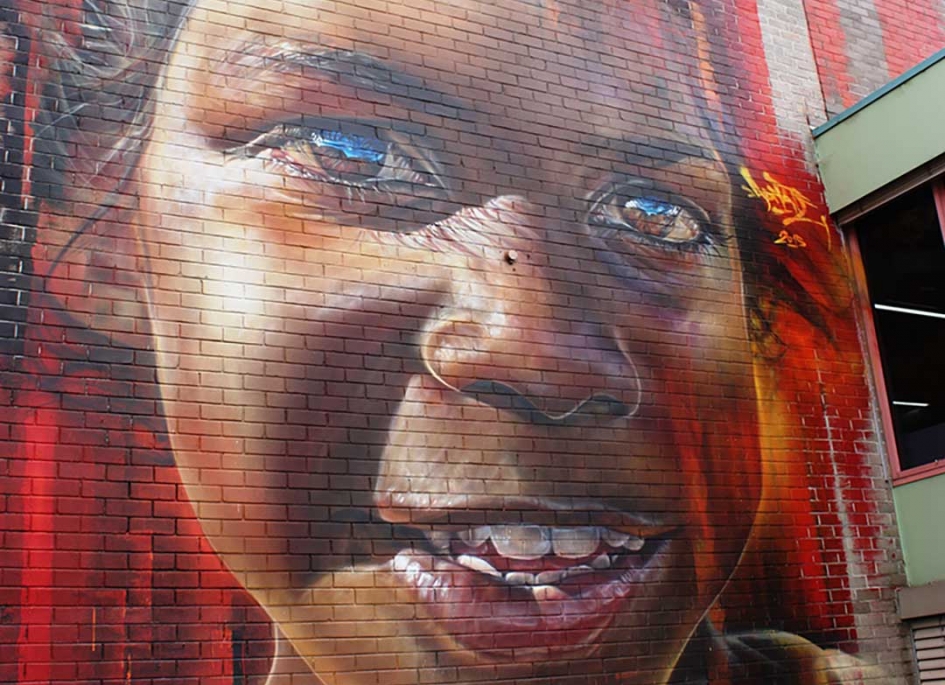 How many local libraries boast a hand painted masterpiece from a world-renown artist? Not many! The back wall of Nowra Library has been transformed into a stunning mural that showcases the Indigenous people of Australia, Nowra and the region’s culture. Melbournian artist Matt Adnate’s portrait of a young Aboriginal boy celebrates the Shoalhaven’s rich indigenous history and hopes to tell a message of unification. Inspired by a photo Adnate took during a trip to the Northern Territory, the deep, earthy tones directly link to the colours of the Aboriginal flag. The landscape seen in the reflection of the eyes is left to the viewer’s own interpretation while the black cockatoo pictured flying alongside the boy represents the totem to the people of Nowra and the Yuin Nation. 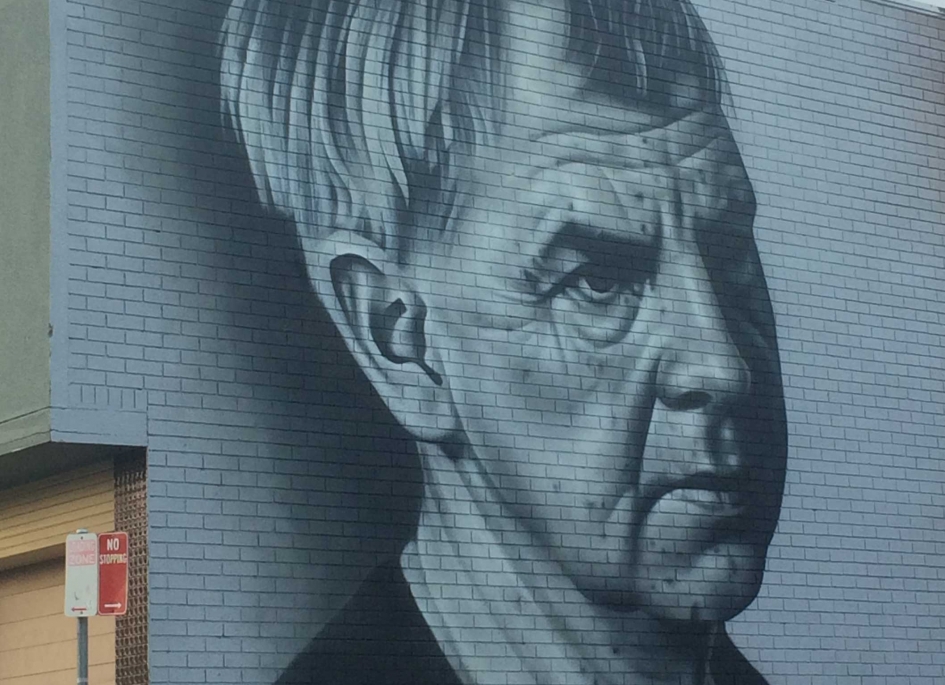 This Nowra artwork is a wonderful celebration of old and new, where the depiction of an iconic Australian artist has been captured beautifully by a contemporary muralist. Owen Dippie’s photo-realistic portrait of the late painter Arthur Boyd is a tribute to a local legend who has made a significant contribution to the arts. In 1993, Boyd gifted his property and painter’s studio, Bundanon Trust – along the banks of the Shoalhaven River, to the people of Australia and ever since the homestead has been a haven for supporting and developing artists across all disciplines. The mural of a gazing Arthur Boyd can be found at Stewart Place, at the back of Sturgiss Newsagency. This Nowra mural is doubly special as it is not only painted by a local artist, it also features another local hero in the Nowra arts scene. SMUG, also known as Sam Bates is the mural’s creator and George Sobierajski is the subject of the painting. This very large artwork rests on the northern side of the Quest Building in the CBD and is a stunning addition to Kinghorne Street. SMUG is a world-renowned muralist who is recognised for his photorealism style and now resides in Glasgow, Scotland. He decided to paint Sobierajski to pay tribute to a local artist who played an influential role at the beginning of his graffiti career. 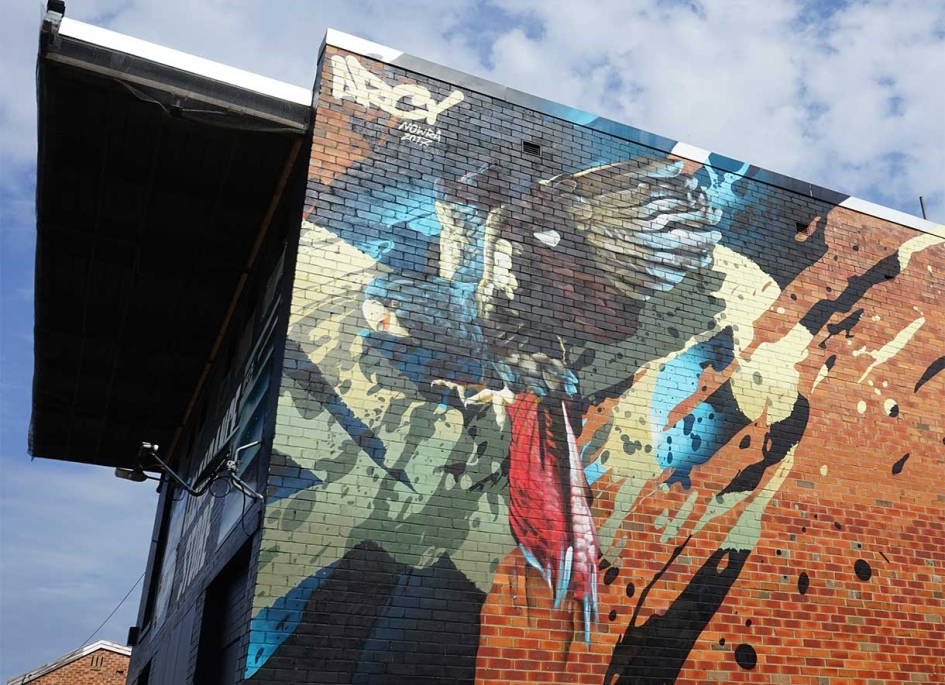 Ryan ‘ARCY’ Christenson’s artwork in Egans Lane depicts a soaring black cockatoo in his signature paint splash style. The mural is a tribute to the local Indigenous community, as the Aboriginal word ‘Nowra’ means Black Cockatoo. The animal is a totem for this South Coast locality and ARCY’s piece celebrates the bird in all its glory, covered in reflections of colours that also represent Nowra’s surrounding coastal environments. The artwork touches upon the region’s rich Aboriginal identity and highlights the significance of celebrating Indigenous Australia in modern art. ARCY’s mural is fun, vibrant, colourful and never fails to catch the attention of passers-by. 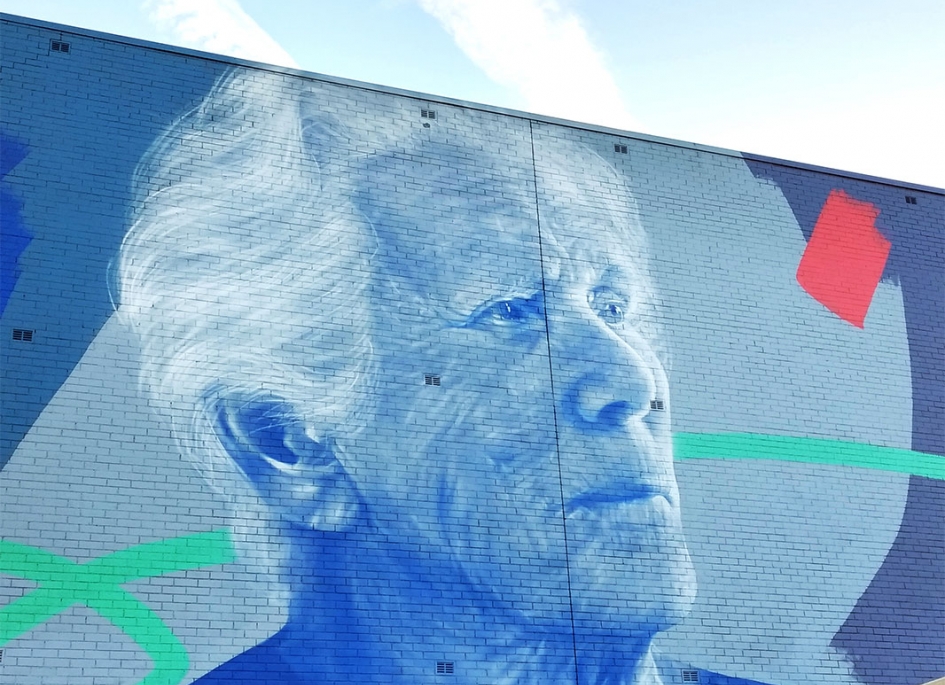 Claire Foxton –  The Face of A WWII Veteran

Wollongong artist Claire Foxton’s mural on the wall of Nowra’s Holt Centre building tells the story of local air force veteran Narelle Hart. Narelle has been a Nowra local for over 70 years and served as a young recruit with the Base Torpedo Unit in the Women’s Auxiliary Air Force during World War II. Foxton’s piece aims to honour a strong woman who has made a significant contribution to the community’s history. Her artwork combines a realistic portrait with a colourful and abstract background, giving the piece a sense of fun and playfulness. This is currently one of the largest Nowra murals to date and well worth checking out in person. 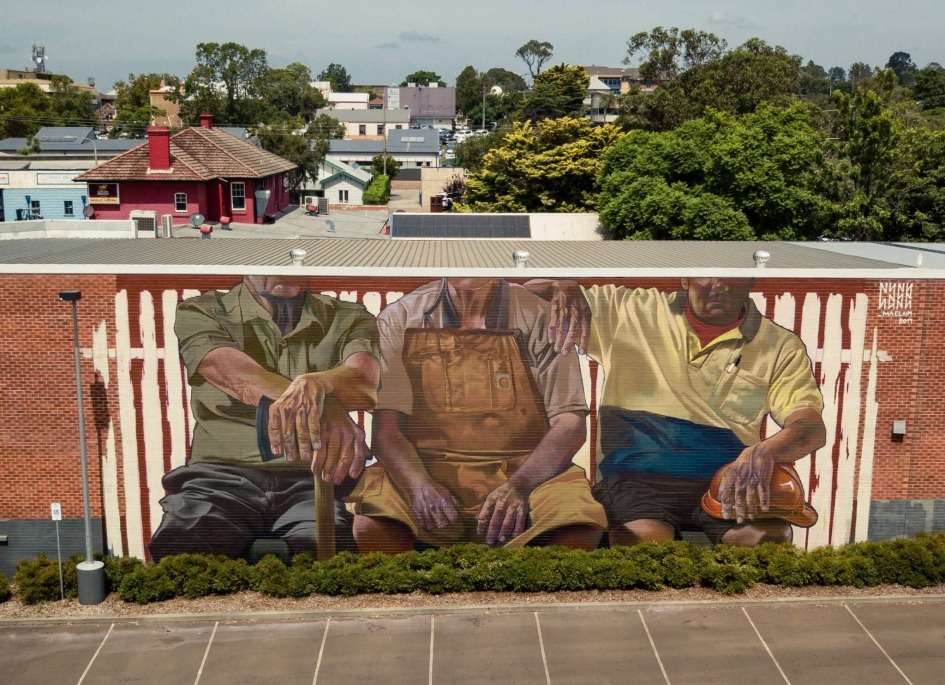 Case Maclaim – The hands that built our place

The seventh mural in the series is painted by renowned German artist, Case Maclaim (Andres Von Chrzanowski) and is located on the Ison and Co. Hardware wall that fronts the Gasworks carpark on Bridge Road. Case is known for combining photorealism with surrealism, with many of his creative pieces shedding light on the struggles afflicting different people and cultures around the world.  The image Case has created for the Nowra mural series symbolises the significant contribution of those who have built our town over generations and acknowledges the physical struggles involved. Instead of identifying individuals and their faces, the artist has focused on the detail of the hard working hands to really draw out this symbolism.

Case, along with his wife, Samira, spent some 7 days working dawn until dusk to complete this piece; an act that embodies the spirit of what the art work represents. Scott Nagy and Krimsone are both internationally recognised muralists that originate from the Blue Mountains. After working in cities across the globe they now form an ongoing collaboration traveling Australia painting fantastical landscapes and scenes that aim to represent, engage and interact with the local community.

Facing north on Haigh Ave, Dreamboat depicts how suburban living flows into the native environment and how humans should passively take in all it has to offer. The artist’s’ comment that we should all be able to subconsciously live with our surrounding environment in peace and in a dreamlike flow or state, being one with nature. 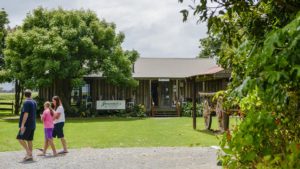 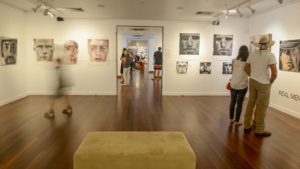 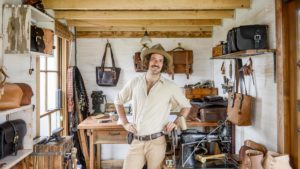